There is always something happening on the roads or in the passages when you walk around in Pakistan. Pakistan has its vibe of positivity and chance. The franchises here too are following the same path. They always stay awake and do things out of the box. Recently, McDonald’s Pakistan randomly tweeted “I miss you” as a promotional stunt. In fact, they want to announce the launch of a brand new outlet in North Nazimabad. Twitter is also taking full advantage of the scene. And responded in the most charming yet sarcastic way possible.

Well, if you think Twitter responds with a “I miss you too.” Then you are wrong. Surprisingly, Twitter responded with a “Nahi”! in case you don’t know, that means no. This leads to a whole thread of Tweets from random Pakistani people and citizens. Some of them are beginning to appreciate the services. While others want an improvement in the franchise. And lots of people were writing for free meals and discounts. Overall the thread was very healthy and people are enjoying the random moment. Many also praise McDonald’s for opening a new outlet.

Launch of a new point of sale

After the first Tweet, the second revealed the whole scene. In this they announce their new opening. They say, “Kheench layi apki yaad, North Nazimabad! “. This makes more sense for the I miss you message. The company is doing just as well in the country as it does in other countries. You can have all the food options that you can find in any developed country. Their milkshakes and burgers are excellent and second to none. You can dine in, take out or order from the drive-thru. 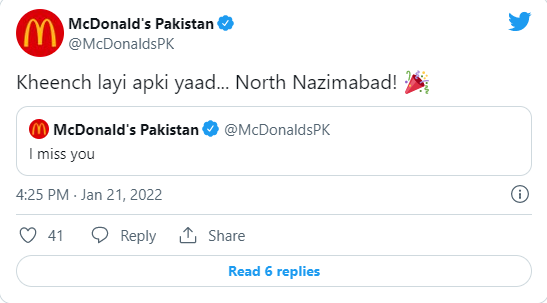 Surely that makes you hungry, right? So why not order your favorite dish at this cold time of day!